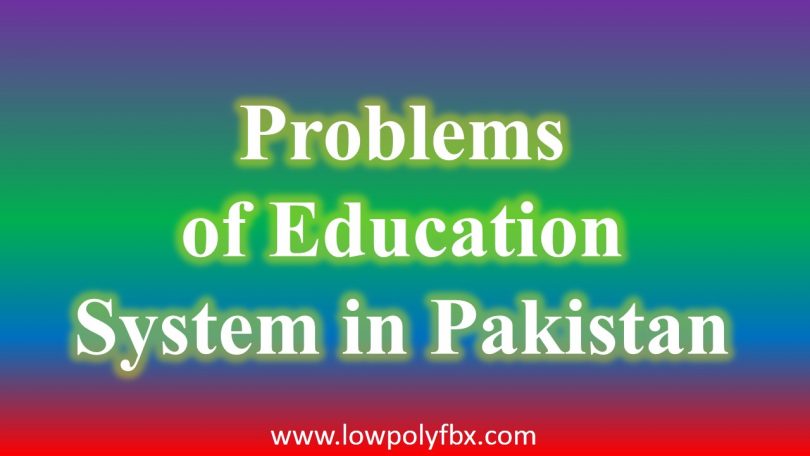 In Pakistan there are several systems of education. There is matric, O/A levels, religious preaching institutions, Madrassas etc. Each system has its own way of evaluating a student and each of them award their own particular degrees and certificates. These different systems of imparting knowledge have caused many problems such as social stratification, social conflict and a sense of discrimination among the society. Then the educational institutions are divided into two major sectors; government and private. Students who have high financial capacity go to private institutions to acquire education. On the other hand, students with weak financial background turn to government institutions. These different forms of education systems in Pakistan has highly affected the mindset of the Pakistani society. There is a classification of students which is created in Pakistan.  A student who has done O/A levels is not considered equal to the student who has done matric. Education promotes social integration and cohesion but in Pakistan due to different versions of imparting education social stratification and social conflict is on the rise.

Pakistan’s system of education is cramming oriented. Examinations are held annually and the one’s with sharp memories emerge with flying colors. Exams are merely the tests of a student’s cramming capacity. No attention is paid to the practical application of the theories or ideas that are written on the answer sheet during the exams. On top of everything no technical education is provided to the students. This is one major differences between the educational system of Pakistan and the education system of the developed states. Pakistani students are living in a state of disconnection and indifference with the technical education.

Many other factors such as overpopulation, poor demographic management, gender discrimination etc. have immensely contributed to the problems of education system of Pakistan. Majority of the population of Pakistan resides in rural areas and there are no significant schools, colleges or universities in the rural areas. So, in order to acquire education students from villages rush towards the educational institutions of cities which inevitably leads to the accommodation problems like there are only few seats for a program and there are hundreds of candidates. Poor demographic management in Pakistan has also given rise to the educational problems. For example, Balochistan occupies almost 45% of the total landmass of Pakistan and yet only 5% of Pakistan’s population resides in Balochistan. Considering this situation there are no significant universities in Balochistan. So, the students from Balochistan turn towards densely populated Punjab for educational endeavors which results into intense competition to attain admissions in desired institutions. And this problem is not only limited to Balochistan but the same case is with Sindh and Khyber Pakhtunkhwa also. Students from remote areas in interior Sindh rush towards Karachi and the students from all over the province of Khyber Pakhtunkhwa turn to Peshawar. And this is mainly because of the fact that the educational institutions are not equally divided according to the population. Hence poor demographic management has great effects on the education system of the Pakistan.

Conservatism, traditionalism and orthodox approach has a great impact on the education system of Pakistan. And these factors have given rise to gender discrimination. Due to these conservative elements in Pakistani society girls are not sent to schools, colleges and universities. And this is mostly prevalent in the provinces of Khyber Pakhtunkhwa and Balochistan. Untrained and unqualified teachers have a huge effect on the education system of Pakistan. First there is shortage of teachers and then the teachers are not qualified enough. Negligence of teachers has also contributed in this regard. Especially in the government schools’ teachers are not only qualified enough but they also physically beat the students and moreover torture them due to which a student sometimes loses his or her interest in going to schools and hence engages in immoral activities.

One of the biggest flaws in the education system of Pakistan is that a student is allowed to get admission in more than two programs at one time. And the degrees are awarded even if the student has not attended classes regularly. A very low criteria is established to pass the degree. And the student somehow manages to pass the exam just by studying one day before the exams. Because the exams are just the tests of one’s memory. Due to permission of multiple degrees at a time mostly students lose their interests and are not able to grasp the concepts of even one program. And hence this has given rise to deficiency of qualified and competent professionals in Pakistan. There are many incompetent doctors, engineers, teachers, lawyers, etc. in Pakistan.

Education is the parameter that distinguishes between developed and developing states. Without education the progress and advancement of a nation is impossible. In the case of Pakistan, the government needs to take serious steps now more than ever for the eradication of the flaws that exist in the education system of Pakistan. Because without any rigorous reforms, legislations or policies in the educational sphere, Pakistan will fail to keep pace with developing nations all around the globe.