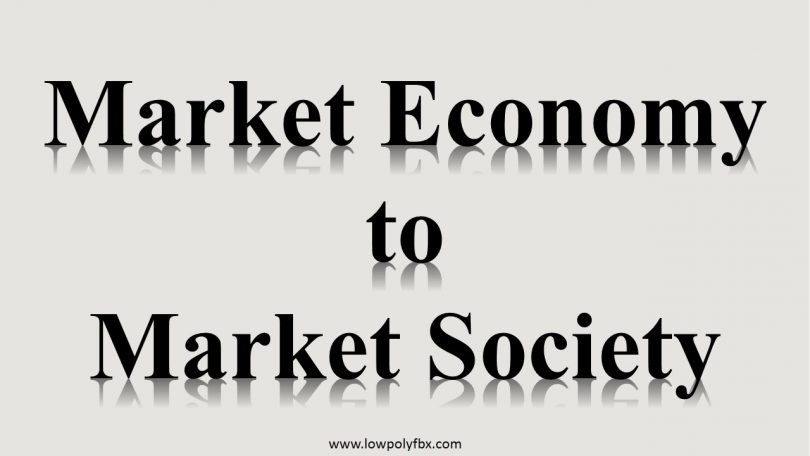 We have often heard a maxim that money can’t buy everything but in this liberal economic order where everything is available for sale; the domain of markets is extended far beyond its traditional orbit and there is left a very little amount of things that money can’t really purchase. Over the years, we have briskly drifted from market economy to market society, where we find even the non-economic products well-reachable to financial hands and it indeed paints a somber picture. Though the origin of this development is quite recent yet it is currently predominant across the globe. The traditional role of markets was restricted to material domains but as soon as the market-oriented thinking penetrated into our social or civic life and as the dividends of money went ever-increasing and more involved, a market-driven society took birth and today financial transactions have come to monitor every social, political or civic aspect of human existence. For instance, there were more private military contractors in US led war in Iraq and Afghanistan than actual number of American troops. In this way, war which was essentially a civic job became purchasable and it literally got “privatized”. However, the real object of war dies down but because it is highly advantageous for military industrial complex so these defense conglomerates have made their existence permanent by developing an inseparable connection with political regimes. Moreover, the planet we inhabit has become an interconnected place of existence where financial-indicators are the most persuasive benchmarks of development and prosperity even in non-economic spheres.

Peeping in retrospect, when free market systems were blindly relied upon with an invisible hand deliberately making independent economic decisions, government interventionism was least operative and effective. In the wake of this vacuum created, governments were getting increasingly unnecessary, hence, governments all around the world tried to reinstate their leadership position by concocting a lethally solidified nexus with financial markets. Governments and markets were taken as the two same sides of a same single coin and this era came to be known for its massive market triumphalism, when marketization of everything took place. However, financial crises of 2007 was a hiatus in market domination, played a significant role in shaking the foundations of market authoritarianism; assailing market systems by unconventional questions of avarice and outsourcing of non-market values. Debris of criticism was hurled at the leaders of market management i.e. governments. A trust deficit erupted in market brokered deals and financial credibility of economic setups was lost in oblivion. But in brevity of

time, markets managed to resurrect again and redeem their gone hegemony and glory. Market domination gained force again and is now matured into market society; where even non-monetary practices are inextricably intertwined with financial interests. With hazardous implications rendered by market societies, the debate of re-demarcation of market limits has become immensely relevant.

Market mechanisms and market-based maneuverings can be widely and conspicuously observed as dominating all sorts of material as well as non-material spheres of life. Here are the few practical manifestations, as under;

In developed countries like USA, a homeless, jobless or needy person can be hired to stand in long queues for ticket purchasing outside amusement parks, congressional hearings and even in security lines on airports. All one has to do is to pay an additional sum of money and one can fast track that long line even sitting at home. There are even formally organized line standing companies offering different packages for this cruel cause. A moral quagmire sprouts here that; is it always true that those who are willing to pay more for the event will certainly be valuing it more? And Isn’t it morally objectionable to make someone else work for your own sake? Furthermore, market incentives are employed for discouraging or encouraging any kind of social behavior or social practice. Like, paying children for good grades or paying addicts a monetary compensation for abandoning their corrupt activity would engender a negative trend in society. Question arises that would those addicts continue to remain away from their ill practices as soon as the financial benefit is withdrawn from them? Moreover, Market systems are also neck-deep involved in the most sensitive questions of life and death. For instance, Janitor insurance allow the corporations to own life insurance in the title-name of workers and in the event of their death; company gets all the financial benefit leaving the deceased’s family helpless and hapless. Another type of market exploitation can be vividly seen in viatical settlements, where terminally ill patients sell their insurance policy at usually half price for instant cash incentive. Morality intervenes to reject these practices not merely because they are not consensual transactions but also because this entire company policy of owning a life insurance policy on someone’s behalf rests on the person’s death, in whose name the life insurance is owned, consequently death of the worker is preferred over his or her healthy living.

Conversion of market economy into market society trickles down two foremost implications; firstly, when money gets involved in every economic or non-economic bargain, social inequality automatically surges. Rich strata of society develop an easy access to even the essentials of a good life and poor people confront relentless social persecution. For example, auctioning of college admissions banish poor people from intellectual race and rich people no matter how dull they are, given easy admissions. Secondly, this enlarging financial clout in society transforms the fundamental nature of the social practices along with certain attitudes towards the happening. It commoditizes even non-material goods of society corroding their inherent significance and meaning. For instance, paying kids for reading books may encourage them to read but at the same time can also develop more love of money than love for books in them.

In order to create an orderly society, we must settle down social practices that we value and care about the most and then define the parameters of market forces to the point that they don’t undermine our most prized social values and beliefs. We must delineate the limitations of market operability. In addition to this, market societies jeopardize democratic tendencies and values by segregating the social standing of population. In democracy, we honor the discrepancies of everybody and respect all social citizens regardless of their social power or financial standing, but these distinctions are further crystallized in a market society that encourage all segments of society to lead a segregated and unconnected life. This compartmentalization of society is robustly against the primary ethos of democracy and so threatening to a peaceful coexisting society.