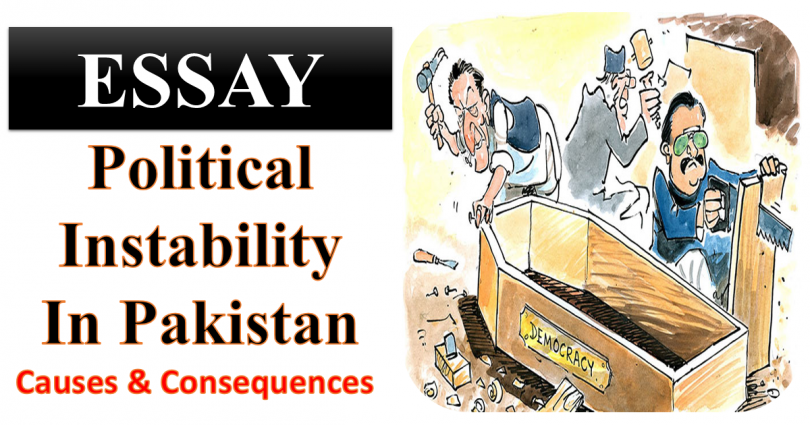 Political Instability has been the major problem in the legacy of Pakistan. It gives rise to many other issues including poverty, injustice, corruption, lack of competence and literacy rate. It has been a major hurdle in the development of Pakistan. Political stability is necessary to maintain the social fabric and legitimacy in the state. It is also prerequisite for the economic development of the state. But Pakistan is under the shadow of political instability from its birth. The chemistry of political instability is simple. Uncertain political environment leads to lowering the investment, upheaval of market rates and inflation. This generates the instability in economic system which leads to poverty, illiteracy and much more social and political problems. It also surges due to clashes between political institutions, lack of normative codes and civic duties.   Pakistan has been ruled by both Democratic leaders and Military dictators. As there was ineffectiveness in political parties and volatility in politics, this paved the way for the tug of war between political parties and military dictators. In my viewpoint, the main cause of the political instability is the incompetency of the political leaders which I will prove with arguments in the paragraphs mentioned below.

After the foundation of Pakistan, our visionary and far-sighted leaders Like Quaid-e-Azam Muhammad Ali Jannah and Liaquat Ali Khan spent a little time with us. They departed from the mortal world leaving us behind alone without their any substitute. At that time, there were no clear guidelines for new established state. But in 1949, the Objective resolution was passed by the first legislative assembly of Pakistan under the leadership of Liaquat Ali Khan, the 1st Prime Minister of Pakistan. This legendary step created a tint of hope. But in 1951, the assassination of the Prime Minister transformed this expectancy into dismay as it bestowed path to the rule of Military over the state. The concept of Islamic state also gave rise to conflict between the Theologians and political leadership. From 1947 to 1958, 7 Prime Ministers resigned due to tension in political hierarchy. Although the constitution was written in 1956, but it was swiftly overthrown by Ayub Khan in 1958 due to these tensions in political hierarchy and subsequently, he imposed the 1st the Martial Law in Pakistan.

Ayub Khan also made the Constitution of Pakistan in 1962 based on Presidential System. It was a good step by Ayub Government. But he also constructed the political parties to suppress the antagonistic parties.Then, he arranged an election in 1964 in which he manipulated the presidential elections to subdue the Fatima Jinnah. From the era of 1962-1969, there were a lot of political disturbances and tensions. This was all due to political incompetency and lack of leadership. And in 1971, due to these political strains, an insurgence rose up in East Pakistan and a huge loss had to be gripped in the shape of dismantling of Pakistan and foundation of Bangladesh.

Zulfiqar Ali Bhutto, the Founder of Pakistan People’s Party, became the president and after 1973 became the Prime Minister of Pakistan. The current Constitution of our country was made in 1973. But the thing is that from 1956 to 1973, Pakistan faced frequent Constitutions of 1956, 1962 and 1973. But on the other facet, India which also got independence in 1947 made their Constitution in 1949 which is still enacting in state with a little amount of amendments. This shows how they are politically stable. After 1973’s Constitution, it was conceived that Pakistan would get on trek stably as there were a lot of policies like nationalization, agricultural reforms, ameliorated foreign policies, better ways of trade, etc.

But in 1977, there arose a lot of political strains leading to prevail of 3rd Martial Law imposed by Zia ul Haq. Zia ul Haq also ruled over Pakistan for about 11 years from 1977 to 1988. In his regime, he also enacted undemocratic moves to lengthen his tenure and also didn’t attempt to stabilize the political environ. He imposed a lot of Islamic Moves to get popular will but failed to attain his goal. He also didn’t bestow the political liberty to parties. From 1988 to 1999, Pakistan faced the bizarre political situation due to overthrown of four governments consecutively. In these years, election manipulation was at its peak and Asghar Khan Case is a thinking point for these elections.

After observing all these political tensions and strain, Chief of Army Staff, General Pervaiz Musharraf overthrew the Democratic Government and installed 4th Martial Law. Like Zia ul haq, Musharraf also exploited the democratic moves to catch the popular will but he failed. He didn’t have any democratic vision and manifesto and he attempted to govern the state like a monarch. After the initiation of Afghan War, he bestowed all kinds of endorsement to America which led the country to the verge of chaos. And due to this, he failed to grab the institutional will. His era was from 1999 to 2008. From 2008, Pakistan observed a new democratic change which still can be viewed. For the first time in the history of Pakistan, from 2008-2018, two governments accomplished their tenure. But in these years, our political system faced many hurdles regarding instability as 2 Prime Ministers were changed in the first tenure and similarly in the second tenure also. In these years, we also heard the news about military dictatorship as imposed in preceding years. As there were the gossips about the changing of system; either presidential system or parliamentary system.

From 1947-2019, we can’t decide about the suitable system for the state. This is the political instability about which we are contemplating. The solutions for these political tensions are here mentioned:

These all points confiscate military influence in politics. And if this influence in tackled in well ways, this will lead to monopoly of democracy and progression of Pakistan. In a nutshell, political stability and democracy is in favor of Pakistan and flourishing of state.